What is a “No Fault” Divorce? 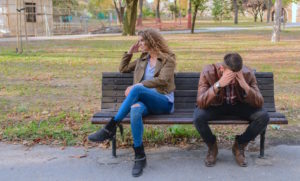 Colorado is a “no fault” divorce state. What does that mean?

In the past, obtaining a divorce was more difficult than it is today. You had to show grounds for why a divorce should be granted and the marriage contract dissolved. These grounds, or justification for the divorce, included abandonment, abuse, and neglect.

Then Colorado became a “no fault” divorce state. This means you no longer need a reason for a divorce ”“ a couple may get divorced for any reason at virtually any time. For legal purposes, it is enough that at least one spouse considers the marriage “irretrievably broken,” meaning there is no chance of reconciliation.

Like the name suggests, in a “no fault” divorce, a divorce court will not assign fault or blame to either party. The divorce does not need to be justified to the court and neither party’s behavior can be used against them as the “at fault” party.

How Does This Affect My Divorce?

Because no one is legally “at fault,” a court won’t consider either party’s behavior or fault in the division of assets and other financial matters, such as alimony. In fact, a judge generally won’t even allow a party to present evidence of the other’s behavior, because it simply isn’t relevant. The parties aren’t trying to convince the judge to grant them a divorce; rather, the judge is dealing with issues such as the dissolution of property, splitting financial assets, and determining parenting time. In other words, from a legal perspective, the judge is concerned with the effect of a divorce, not the cause.

Is There Any Time That One Party’s Behavior May Be Considered In Divorce Proceedings?

There are exceptions where evidence of a party’s behavior may be relevant to the divorce proceedings. One exception is where a party’s behavior directly impacts the couple’s children. In that case, a divorce court may take the behavior into account in determining parenting time in order to protect the children.

Another situation where behavior may be relevant to the divorce proceedings is in the case of economic fault. Economic fault is where one party wastes assets or incurs debt in anticipation of the couple’s divorce, thereby reducing the value of the joint marital estate. This exception is quite rare and must be carefully presented to the court.

Generally, a “no fault” divorce results in quicker, more streamlined divorce proceedings than the old “at fault” model. It is considered more equitable and fairer to the parties.

If you have questions about your no fault divorce, call us at 720-542-6142 or contact us here to schedule a comprehensive consultation with one of our experienced attorneys.