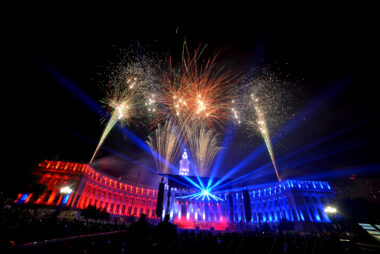 With the Fourth of July rapidly approaching, you need the down-low on where to see the fireworks! With help from Denver7, we have collected a list of events and fireworks shows across the state of Colorado for you to enjoy!

Aspen will be chock-full of Fourth of July celebrations this year, including a parade from 11 am to noon, a Bogie’s Run, Kids’ Parade Bicycle Decorating, community Village, a laser light show, and more! Check out aspenspecialevents.com to learn more!

Aurora has FREE Fourth of July events on the Municipal Center Great Lawn! The event will include live music starting at 6 pm and the fireworks will begin at 9:30 pm!

The fireworks at Folsom Field have been cancelled this year/ however, you cans till celebrate the occasion with a variety of events including live music and the farmer’s market!

The Breckenridge festivities will begin with a 10k at 7 am and continue on with a parade, a reading of the Declaration of Independence, a Spray and Play, and live music. Fireworks are unfortunately prohibited within Breckenridge city limits.

Buena Vista will be celebrating the Fourth in style with Freedom Fest! Freedom Fest will begin at 9 am at McPhelemy Park. Festivities also include a pancake breakfast at Columbine Park, a 5K, and a parade! Fireworks will begin at dusk at the Rodeo grounds.

If you need some July 3rd activities, be sure to check out live music at McPhelemy Park from 6-8 pm.

Castle Rock has unfortunately cancelled their fireworks for this year. The fireworks will be rescheduled if or when the fire danger decreases!

Pikes Peak Center will be hosting a free concert and block party in Downtown COSP on July 4th! The block party will include food, a beer garden, and a concert broadcast. Festivities begin at 3:30 pm!

The City of Denver will have activities throughout the city, including fireworks, museum exhibitions, good food, and more! To learn more about what’s going on in Denver this weekend, visit www.denver.org

On July 4th weekend, downtown Durango will host a variety of 4th of July activities! On the 1st, you can catch “The Sandlot” in Buckley Park and enjoy live music. On July 2nd, the first annual BBQ, Bulls, and Beer competition will begin at the La Plata County Fairgrounds. On July 4th, there will be a breakfast at Rotary Park, a Freedom 5K, picnics, and live music! Don’t forget to check out the parade on Main Avenue from 5-6 pm.

Unfortunately, fireworks have been cancelled in Englewood this year due to drought conditions. In lieu of fireworks, the city of Englewood, along with surrounding towns, will be hosting an Independence Day Celebration! At Cornerstone and Belleview Parks you’ll find food trucks, vendors, face painting, live music, and more on July 4th from 1 to 6 pm.

Estes Park Fairgrounds ill be hosting the Big Bang! Concert, which will include music, food, and local drinks! Fireworks will begin at 9 pm over Lake Estes.

The City of Fort Collins will be hosting their Independence Day Community Celebration on July 2nd. The parade will start at 10 am on Mountain Avenue, followed by baseball games from 1-7 pm, live music from 3-9:35 pm, a food truck rally from 4:30-10 pm, and fireworks from 9:35 until finish. The fireworks show will be held ay Sheldon Lake City Park!

Unfortunately, Golden will not hold a fireworks display this year due to fire danger. Instead of a fireworks show, you can attend the annual 4th of July Festival in Lions Park, which will include live music!

Grand Junction will begin their celebrations on July 1st with a concert from the United States Air Force Academy band at the Las Colonias Amphitheater at 7 pm. Grand Junction itself will not host any fireworks, however the Grand Junctions Rockies will set off fireworks at their July 4th game. You do not need to be inside the stadium to see the fireworks.

Greeley will host their annual 4th of July Parade on July 4th. This year will mark the 100th anniversary of the event. The fireworks are scheduled for about 9:30 pm.

The Independence Day Celebration will be held from 4-10 pm at Waneka Lake. The event will include live music, face paint, trampolines, bounce houses, food, and a beer garden.

The city of Lakewood has unfortunately had to cancel its fireworks display and festivities.

On July 3rd, Littleton will host the Stars and Stripes Forever: Concert and Fireworks at Farm House at Breckenridge Brewery in Littleton. The event runs from 8-10 pm and will end with a fireworks display.

Loveland’s July 4th festival will take place at North Lake Park. The festival will feature face painting, balloons, food and drinks, a bike parade, and live music! Fireworks will go off along Lake Loveland around 9:15 pm.

The professional fireworks show will kick off at 9:30 pm on the Historic Arkansas Riverwalk on July 4th.

The Telluride 4th of July Parade will take place on 11 am on Main Street.